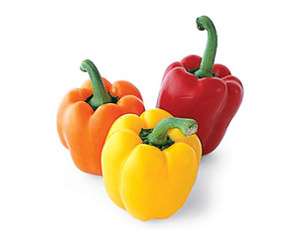 Named for their bell-like shape, bell peppers are actually a fruit in the same family with tomatoes, potatoes and eggplant. For gardeners, peak season is summer, but bell peppers are available year-round in the produce department of any supermarket. Our recipe for Grilled Summer Fresh Peppers shows them off in all their summer glory. During fall and winter, when it’s chilly outside, it’s chili time inside, and many of our chili recipes call for a bell pepper or two. Another place where bell peppers pop up with amazing frequency: stir-fry recipes and pasta recipes—and no wonder. They add color, flavor and vitamin C to any dish lucky enough to list them as an ingredient.

Bell peppers come in a variety of colors, including green, red, yellow, orange, purple, white and brown. Their sweet, mild flavor and crisp, juicy flesh make them a cooking staple. Bell peppers can be stuffed and baked, grilled, roasted, stir-fried and served in salads, stews and soups. Green peppers, the most common and least expensive variety of bell pepper, are picked before they ripen and have a slightly sharper flavor. When left to ripen, green peppers become sweeter and turn red, yellow or other colors depending on the variety.