How to Bake a Ham

Whether you’re enjoying it as part of your Easter spread, as a Christmas centerpiece or simply during a long weekend lunch, baked ham is a delicious dish that’s great for sharing. And—impressive as it may be—it’s actually very simple to make!

Whether you choose to bake a boneless, bone-in or spiral ham, the technique for baking a ham is basically the same.

Start by heating the oven to 325°F and placing your ham in a roasting pan*. For fully cooked hams, plan on a 10-minute baking time per pound. For smoked and not fully-cooked hams, allow 20 minutes per pound. The same goes for raw/fresh ham. Always follow a recipe for exact baking times. You can use a digital meat thermometer for an instant read to test whether your ham is fully cooked to 145ºF.

To hatch or not to hatch? Hatch marks are the diamond pattern sometimes found on baked hams. If you’d like to serve your ham with hatch marks, they are quite easy to create. Use a paring knife to make shallow, even, diagonal cuts across the top of the ham in one direction. Repeat, making slits in the opposite direction to form diamond shapes. Hatching the ham will allow it to catch all of the tasty glaze!

While your ham is baking, use the downtime to make the glaze. The sky’s the limit when it comes to flavoring your ham glaze—glazes can be sweet and savory, sweet and tangy or sweet all the way through. For flavor inspiration, think mustard and maple syrup, vinegar and pineapple, marmalade and soy sauce or apricot and BBQ sauce. The combinations are endless!

Once the ham is almost fully baked, brush on your glaze to create a generous and thick sticky layer.

Now that you’ve learned how to bake a ham, give it a go in your own kitchen! Try out some of our favorite recipes for baking a ham:

For more ham-related resources, check out our article on how to cook a spiral ham and tips on cooking an Easter ham.

*As an Amazon Associate, we earn from qualifying purchases.* 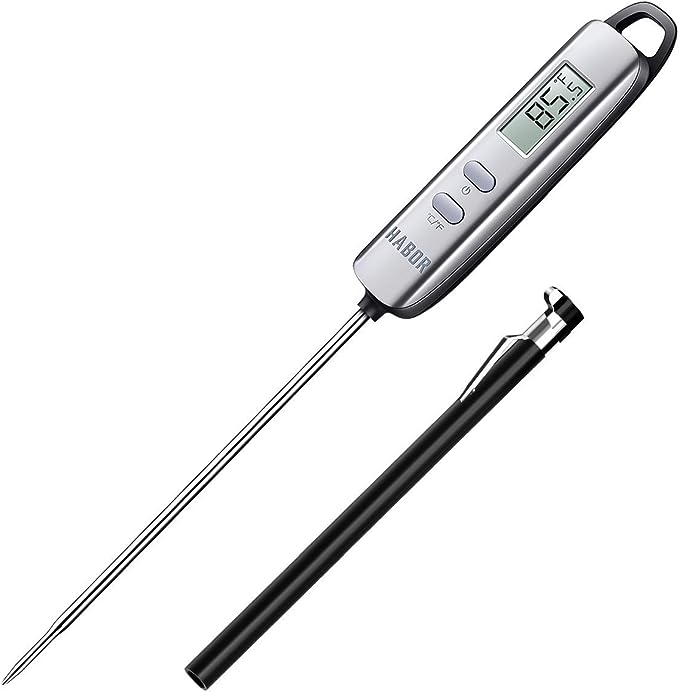 SHOP OUR TOOLS
Digital Meat Thermometer
from amazon.com
Follow us:
HELP & SUPPORT.
GET US ON THE GO
GET TO KNOW KRAFT HEINZ
KRAFT HEINZ SITES
KRAFT HEINZ BRANDS
Contact Us Terms of Use Privacy Product Locator Do Not Sell My Personal Information
©2021 Kraft Foods
H.J. Heinz Company Brands LLC.
All Rights Reserved